Europe and the End of the Cold War | International Conference | Speakers 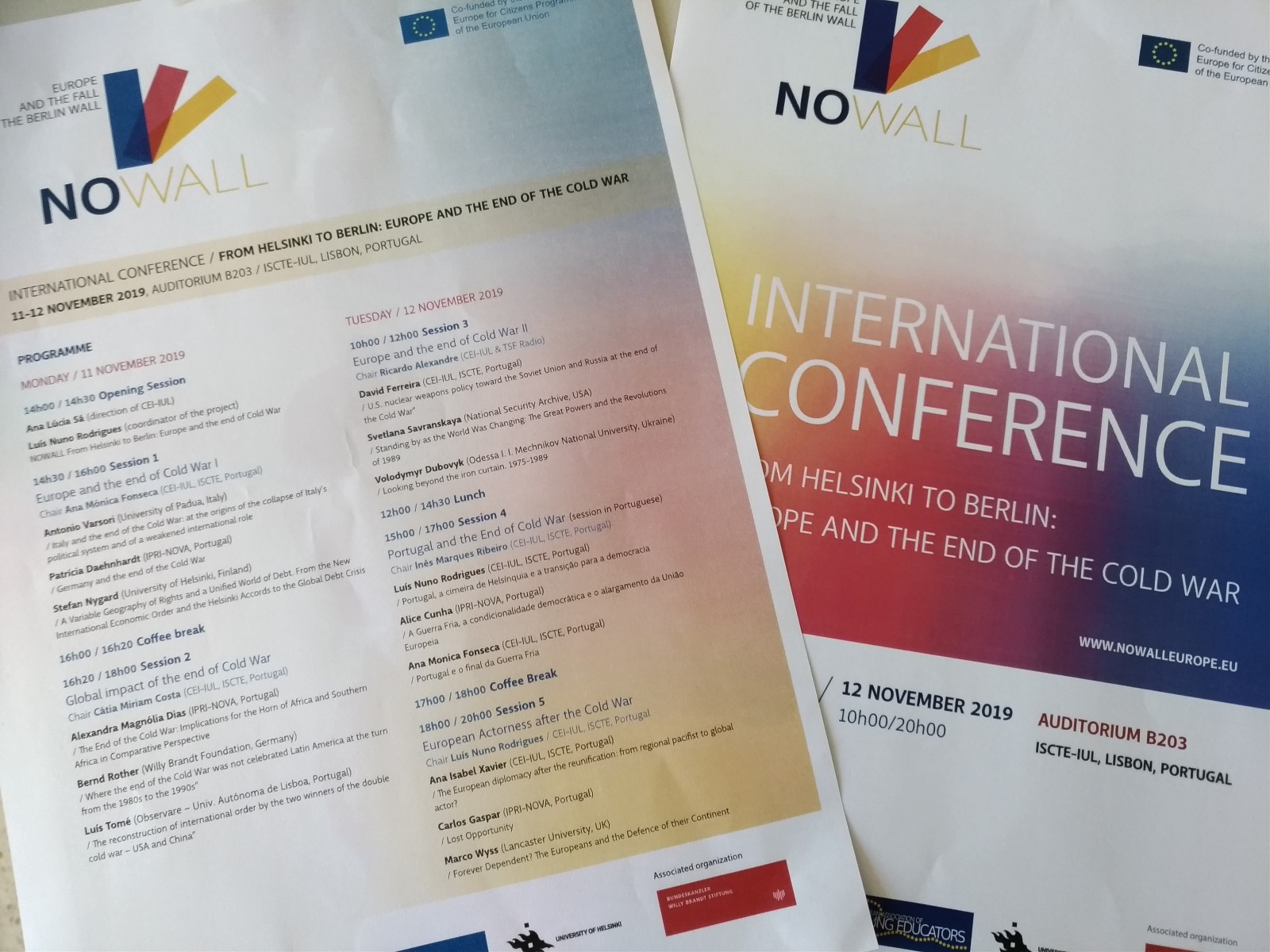 Alexandra Dias. Assistant Professor at the Department of Political Studies of Nova, University of Lisbon and a Researcher at the Portuguese Institute of International Relations at the same University (IPRI-NOVA). She obtained her PhD at the Department of International Relations of the London School of Economics and Political Science. Her PhD entitled “An inter-state war in the post-Cold War era: 1998-2000 war between Eritrea and Ethiopia” received an honourable mention in the second Selecting Committee of the Portuguese Political Science Association’s (APCP) Prize for Best PhD Thesis. Her research interests span from the Horn of Africa to the Portuguese speaking African space. In this context she has done fieldwork in various Horn of Africa countries. She is doing research on the Portuguese Community of Speaking African Countries and on prevention of radicalization on the basis of solidarism across regional international societies with European and African case studies.

Ana Isabel Xavier. Research Associate in the Center of International Studies (CEI-IUL) and also collaborates with the Research Centre of the Security and Defence at the Portuguese Military University Institute. She has a bachelor’s degree in International Relations, a Master degree in Sociology and holds a PhD in International Relations (European Studies), from the University of Coimbra. Since 2016, Ana Isabel Xavier is also part of the pool of trainers of the European College of Security and Defence in the CSDP Training for Eastern Partnership Countries and CSDP Reflection Seminar. From March 2015 to February 2017, she served as Defence Policy Deputy Director in the Portuguese Ministry of National Defence. She was pro bono President of DECIDE (Youth Association of security, defence and citizenship auditors) and AACDN (Association of former auditors of the Defence National Courses). Ana Isabel Xavier is frequently enrolled in the portuguese media to comment on european and international politics. She is the head of the European Studies section of the Portuguese Political Science Association (APCP). Her main research interests and publications include the European Union, Security and Defence, Human Security, Human Rights and Globalization. In 2015 she was awarded with the Marshall Memorial Fellowship by the German Marshall Fund of the United States. In 2013 she was a Fullbright fellow of the SUSI Institute on U.S. National Security Policymaking.

Antonio Varsori. Graduated in Political Sciences at the University of Padua, started his academic career in the second half of the 1970s with a fellowship of the Italian National Research Council abroad (University of Reading, UK), in March 1985 he became lecturer in History of International Relations at the University of Florence; in 1992 he became associate professor of History of International Relations and in 2000 full professor of the same discipline at the University of Florence. In 2003 he moved to the University of Padua, where he has been chairman of the first level degree course in Political Sciences, member of the University Research Committee, Director of the Department of International Studies (2009-2011), Director of the Department of Political Science, Law and International Studies (2012-2015), member of the Academic Senate (2012-2015 and 2015-2018). In 2014 he has been awarded the “laurea horois causa” in European Studies by the Babes-Bolyai University of Cluj-Napoca (Romania). He has published extensively on European integration, the Cold War and international history. Some of his most relevant publications in the last years are: Storia internazionale. Dal 1919 a oggi, Bologna, il Mulino, 2015; L’Italia e la fine della guerra fredda. La politica estera dei governi Andreotti 1989-1992, Bologna, il Mulino, 2013; – The Andreotti Governments and the Maastricht Treaty: Between European Hopes and Domestic Constraints, in “Journal of European Integration History”, vol. 19, 2013, No. 1, pp. 23-44; Détente and Cold War Europe. Politics and Diplomacy in the Mediterranean and the Middle East, ed. with E. Calandri and D. Caviglia, London, I. B. Tauris, 2012; Europe in the International Arena during the 1970s Entering a Different World, ed. with G. Migani, Bruxelles/Berna, PIE/Peter Lang, 2011.

David Ferreira is an integrated researcher at the Center for International Studies (CEIIUL) and a Ph.D. student in Political Science at ISCTE-IUL, writing his thesis on nuclear weapons in U.S. foreign policy toward Russia. He has a bachelor’s degree in Public Administration from the University of Minho, and a master’s degree in International Studies from ISCTE-IUL. In 2018, he was a visiting doctoral student at the University of Tartu, in Estonia. His research interests include American and Russian foreign policies and relations, nuclear weapons, NATO, and the post-Soviet space.

Luís Nuno Rodrigues holds a PhD in American History from the University of Wisconsin and in Modern and Contemporary History from ISCTE – Instituto Universitário de Lisboa. Currently, he is Full Professor in the History Department of ISCTE-IUL and Director of the Center for International Studies (CEI-IUL). He coordinates the Master in International Studies. Between 2013 and 2019 he was Director of the Portuguese Journal of Social Science. In 2006 and 2008 he was Visiting Professor at Brown University, USA. His areas of expertise are 20th Century History of Portugal, History of International Relations and History of the USA. He has supervised several dozens of doctoral and master’s theses and has organized numerous conferences and seminars, and presented oral communications in a considerable number of similar events. He is the author of 9 books, coordinator of 7 others and has published 46 chapters of books or entries in collective works and 24 articles in scientific journals. His work “Kennedy-Salazar: The Crisis of an Alliance. The Luso-American Relations between 1961 and 1963”, published in 2002, was awarded the Mário Soares Foundation and Aristides Sousa Mendes Prizes. His most recent publications include “Spínola”, published by Esfera dos Livros in 2010, and the collective work entitled “Perceptions of NATO and the New Strategic Concept”, which he edited with Volodymyr Dubovyk. He currently coordinates the research project “Europe as a Global Actor” in CEI-IUL.

Marco Wyss. Director of the Centre for War and Diplomacy, and Lecturer in the International History of the Cold War. Before, he worked as a Senior Lecturer at the University of Chichester, and a Senior Researcher at the Center for Security Studies, ETH Zurich. He also was a Senior Researcher at the University of Lausanne and a Visiting Professor at Sciences Po Lille. Marco holds an MA in History and Philosophy from the University of Neuchâtel, and an MA in International History from the Graduate Institute of International and Development Studies in Geneva, and gained his PhD in Politics and International Relations, as well as in History, from the Universities of Nottingham and Neuchâtel. My research focuses predominantly on the international history of the Cold War. While the initial focus was on the role of neutrality and Britain in the East-West struggle, I am currently working on the Cold War in the so-called Third World, specifically in Sub-Saharan Africa and in relation to Britain’s and France’s postcolonial security roles in this region. Meanwhile, I have also carried out research on peacekeeping in Africa, and the transformation of European armed forces since the end of the Cold War. Prior to moving into and beyond the Cold War, I carried out research on volunteers in the Waffen-SS.

Patricia Daehnhardt. Researcher at the Portuguese Institute for International Affairs (IPRI-NOVA) and Assistant Professor in International Relations, Faculty of Humanities and Social Sciences at Lusíada University. She holds a PhD in International Relations from the London School of Economics and Political Science, with a thesis on “The Remaking of Identity: The Question of Normative Power in German Foreign Policy (1997-2007)”, supervised by Professor Christopher J. Hill. She is a member of the Scientific Council of IPRI-NOVA and of the Scientific Council of Lusíada University of Lisbon. She was a member of the Coordination Section of International Relations of the Portuguese Political Science Association between 2012 and 2014 and the Sections’ Coordinator from 2014 to 2016. She is a consultant to the National Defense Institute since 2008, on German and European security and defense policy, and she regularly contributes to the Portuguese print, radio and television media. Her research focuses on German European, foreign and security policy, EU Common Security and Defense Policy (CSDP), transatlantic relations and the foreign policies of the United States, Russia and Germany in the international order. Some selected publications are ‘Germany in the European Union’, in Reuben Wong and Christopher Hill, eds, National and European Foreign Policies: towards Europeanization?, (Routledge, 2011), ‘Germany, the EU and a transforming domestic political arena’, in C. Bretherton and M. Mannin, eds. Contemporary European Politics: Transition and Europeanization (Palgrave, 2013) and Russian foreign policy in the Euro-Atlantic area: dynamics of cooperation and competition in a broader space (with M.R. Freire) (Coimbra University Press, 2014, in Portuguese). Her latest publications are ‘German foreign policy, the Ukraine crisis and the Euro-Atlantic order: assessing the dynamics of change’, German Politics, 27:4, 2018; ‘Tectonic shifts in the party landscape? Mapping Germany’s party system changes’, in Marco Lisi (ed). Party System Change, the European Crisis and the State of Democracy, London: Routledge, 2019; and ‘European Defence and German Defence Cooperation’, Nação e Defesa, Nº 150, National Defense Institute, 2018.

Stefan Nygård. Has written on 19th and 20th century Scandinavian and European intellectual history, transnational history and the history of writers and cultural avant-gardes. With Marja Jalava and Johan Strang he published Decentering European Intellectual Space in 2018 (Brill) and he is currently preparing a collective volume on The Debt: Historicising Europe’s relations with the ‘South’ (Edinburgh University Press, forthcoming, spring 2020).

Svetlana Savranskaya. Director of Russia programs (since 2001) at the National Security Archive, George Washington University.  She is the author, with Thomas Blanton, of the book The Last Superpower Summits:  Gorbachev, Reagan and Bush, (Budapest:  Central European University Press, 2016), and editor of the book by the late Sergo Mikoyan, The Soviet Cuban Missile Crisis: Castro, Mikoyan, Kennedy, Khrushchev and the Missiles of November (Stanford: Stanford University Press/Woodrow Wilson Center Press, 2012). Dr. Savranskaya won the Link-Kuehl Prize in 2011 from the Society for Historians of American Foreign Relations, recognizing the best documentary publication over the previous two years, for her book (with Thomas Blanton and Vladislav Zubok) “Masterpieces of History”: The Peaceful End of the Cold War in Europe 1989 (Budapest/New York: Central European University Press, 2010).  She is author and co-author of several publications on the Cuban Missile Crisis, nuclear learning and the end of the Cold War, and numerous electronic briefing books on these subjects. She also serves as an adjunct professor teaching U.S.-Russian relations and contemporary Russian politics at the American University School of International Service in Washington D.C. (since 2001). She earned her Ph.D. in political science and international affairs in 1998 from Emory University, where she studied with Professors Robert Pastor and Thomas Remington.  A “Red Diploma” graduate of the Moscow State University in 1988, she went on to study at the Institute of World Economy and International Relations of the USSR Academy of Sciences in 1989-90, before moving to Emory, where she won a dissertation fellowship from the Institute for the Study of World Politics, and worked as a Hewlett Fellow at the Carter Presidential Center in 1993.  Her articles and chapters have appeared in the Journal of Strategic Studies, The Cold War International History Project Bulletin, and the Cambridge History of the Cold War, among many other publications.  She is currently working on the project documenting the Nunn-Lugar Cooperative Threat Reduction Programs and NATO expansion in the 1990s.