WEBINAR | Dissidents and Human Rights behind the Iron Curtain: Dissidents in the East Germany and in the Soviet Union Partners, 22 February 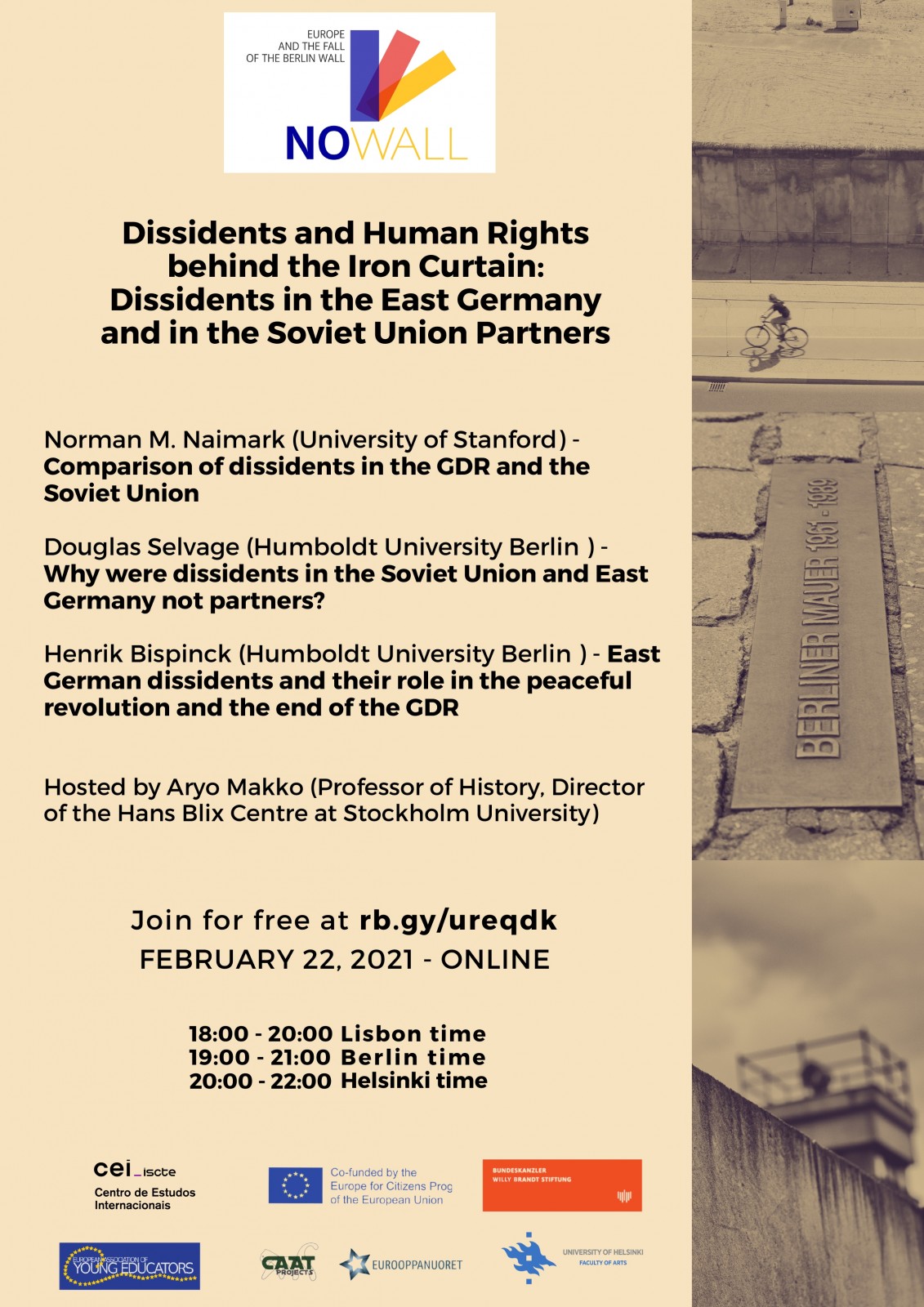 WEBINAR – “Dissidents and Human Rights behind the Iron Curtain: Dissidents in the East Germany and in the Soviet Union Partners”

Join for free at https://rb.gy/ureqdk

Norman M. Naimark (University of Stanford) – Comparison of dissidents in the GDR and the Soviet Union

Douglas Selvage (Humboldt University Berlin ) – Why were dissidents in the Soviet Union and East Germany not partners?

Hosted by Aryo Makko, Professor of History, Director of the Hans Blix Centre at Stockholm University

The webinar aims to present differences of how citizens were opposing to the communist regimes in East Germany and the Soviet bloc countries. Could the way to freedom undergo less obstructed, if more people were united? Freedom was the main political postulate of the opposition movements in Central and Eastern Europe. People fought for human rights and dignity, and for a life in truth, contrary to the appearances created by the party-state apparatus.

In the 1980s, the socialist system, which prevented the existence of parties with values ​​different from the official state ideology, brought to the sight underground groups of people who did not agree with this state of affairs. In each of the countries behind the Iron Curtain, there was opposition, operating under similar conditions, based on conspiracy. Although the communist system did not allow any polemics about its political concepts, the opposition set against the current form of the state and sought to change it.

A year 1989 was the time that the oppositionists created and developed program concepts concerning not only the functioning of the state, but also social changes, covering all areas of politics. As the opposition movements gathered people of different worldviews in their ranks, it was not apparent and simple to manage the common changes.

However, despite the fact that the opposition to the dictatorship always concerned a fundamental issue – the fight for freedom – the activities of opposition movements in the countries of the Eastern bloc differed in such factors like its current political or economic situation or a different ideological tradition.

Norman M. Naimark is a leading historian of the Soviet era. His work centers on the emergence of communism and the establishment of communist regimes in Eastern Europe, Soviet nationalism, Soviet-German relations, the East European involvement in World War II, as well as Russian and Polish revolutionary movements. Recently he has focused on the topic of ethnic cleansing and genocide with the books Stalin’s Genocides (Princeton, 2010 – published in a German edition by Suhrkamp) and Genocide: A World History (Oxford, 2017). He is also author of the studies The Russians in Germany: The History of The Soviet Zone of Occupation, 1945–1949 (Harvard, 1995), Fires of Hatred: Ethnic Cleansing in Twentieth-Century Europe (Harvard, 2001), and Stalin and the Fate of Europe: The Postwar Struggle for Sovereignty (Harvard, 2019), among other volumes. Naimark has been a history professor at Boston University, a visiting professor at Wellesley College, and a fellow of the Russian Research Center at Harvard University. He joined the Stanford University history faculty in 1988 and serves as a senior fellow both at Stanford’s Hoover Institution as well as at its Freeman Spogli Institute of International Studies.

Douglas Selvage is a Senior Research Associate (wissenschaftlicher Mitarbeiter) at the Institute for History of the Philosophical Faculty of the Humboldt University in Berlin since 2019. There, he began his latest research project, “Active Measures and Propaganda, 1966-1989: The Stasi, the KGB and their European Allies.” From 2013-18, he served as Project Director in the Education and Research Division of the Office of the Federal Commissioner for the Stasi Records (BStU) in Berlin. He directed the historical research project, “The Ministry of State Security and the MGB/KGB in the Soviet Bloc, 1950-1989.” In February 2019, Vandenhoeck and Ruprecht published his book with Walter Süß: Staatssicherheit und KSZE-Prozess: MfS zwischen SED und KGB (1972–1989) [State Security and the CSCE Process: The Stasi between SED and KGB]. More recently, the Journal of Cold War Studies published the article, “Operation ‘Denver’: The East German Ministry of State Security and the KGB’s AIDS Disinformation Campaign, 1985–1986 (Part 1).” He is currently co-editing a joint volume with Georg Herbstritt for publication by Vandenhoeck and Ruprecht in 2021 with the working title, Der “große Brüder”: der KGB und das Ministerium für Staatssicherheit 1958-1989 [“Big Brother”: The KGB and the Ministry of State Security, 1958-1989].

Henrik Bispinck is a contemporary historian. In 2008, he received his doctorate from the University of Leipzig with a study on high school teachers as an educated middle class professional group in the 20th century. He has been working in the Education and Research Department of the Federal Commissioner for Stasi Records since 2010 and has been a lecturer at the Chair of Modern and Contemporary History at the Humboldt University of Berlin since 2019.

Aryo Makko is Professor of History and Director of the Hans Blix Centre for the History of International Relations at Stockholm University. He is also a Pro Futura Scientia XI Fellow at the Swedish Collegium of Advanced Study (SCAS) and was elected as member of the Young Academy of Sweden (2017). His research areas include new diplomatic and international history since the late nineteenth century as well as the history, migration and diasporas of Middle Eastern minorities. He is currently developing a broader research interest in migration history. His first book Ambassadors of Realpolitik: Sweden, the CSCE, and the Cold War was published by Berghahn Books (New York/Oxford) in 2016. His second monograph European Small States and the Role of Consuls in the Age of Empire was published by Brill in December 2019. A co-edited volume on Soviet-Neutral relations during the Cold War (with Mark Kramer and Peter Ruggenthaler) will be published in the Harvard Cold War Studies Book Series in March 2021.